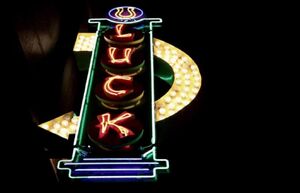 Luck is an American drama program on HBO, the pilot episode of which is based on a screenplay by David Milch. The show follows several characters and their experiences while frequenting a horse racing track. Luck stars Dustin Hoffman as Chester "Ace" Bernstein, a shrewd man in his late 60s who has recently been released from jail.

Retrieved from "https://luck.fandom.com/wiki/Luck?oldid=3966"
Community content is available under CC-BY-SA unless otherwise noted.